The Buddha is known all over the world for his teachings about spiritual awakening after he attained enlightenment while meditating under a Bodhi tree in ancient India. His teachings have been widely acknowledged and revered as his teachings have helped mankind to move forward toward the path of inner truth behind life and death. Even today, 2500 years after his death, the principles of his teachings have been likened and followed by millions of people. This level of following has been matched only by few leaders and the Buddha has been represented in many forms so as to pay respect to him and be inspired to be like him. One of those media of representing the Buddha and his knowledge are Buddha head statues. It is rather believed that by observing the calm gaze and serene expression in the Buddha heads one may find a way to unveil the mysteries behind inner peace and personal happiness. The Buddha heads are symbol of awareness, knowledge, confidence and concentrated meditative practices. Each and every part of the Buddha heads symbolizes the hidden meaning behind Buddha and his vast knowledge. For example, the ushnisha represents his knowledge while the third eye of Buddha symbolizes the all seeing ability of the Buddha, the long earlobes of the Buddha suggests the prosperous life he had as a prince, etc. 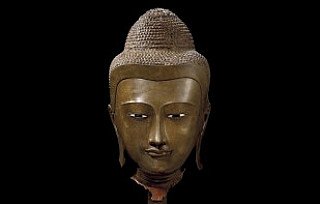 The Buddha heads are one of the most sought after Buddhist artifacts as they perfectly represent the knowledge the Buddha had, so it is natural that Buying Buddha heads can be pretty difficult to do as finding a perfect Buddha heads for anyone to buy or inherit is difficult. They are special iconographic representations of the Buddha as it is believed that the head of the Buddha is the most important part of the Buddha's body. This is the reason behind carving of such Buddha heads in many Buddhist nations like Burma, Thailand, Nepal and China. The carving of such sculptures have been carried out from ancient time and such antique Buddha heads are considered a lot more special given that they have survived the test of time and carry their own story behind them. Buying Buddha heads may help you move forward in the path of spiritual enlightenment as they can act as the source of inspiration and knowledge for anyone. So where can you buy Buddha heads of your own choice, especially if they are antique Buddha heads?

Buy Buddha heads from our gallery